Washington State Gov. Jay Inslee, a Democrat, recently visited a Snohomish County PUD microgrid site. The Arlington microgrid is currently undergoing testing and commissioning and should be fully operational in a few months.

In 2018, the PUD received a grant from the state’s Clean Energy Fund to help build the Arlington microgrid. In fact, the grant covered a quarter of the costs to make the project feasible for the PUD, said Aaron Swaney, a Snohomish County PUD spokesperson, who noted that Inslee has been a champion of clean energy in the state of Washington.

“We’re excited to support projects like this that demonstrate how clean energy technologies such as battery storage and solar can work together to provide the community with renewable energy and grid resilience. Commerce is accepting applications for the next round of grid modernization grants through 5 p.m. on May 18, with a focus on funding and technical assistance for earlier-stage planning and design efforts,” she said.

Inslee was interested in the progress of the project, Swaney said. 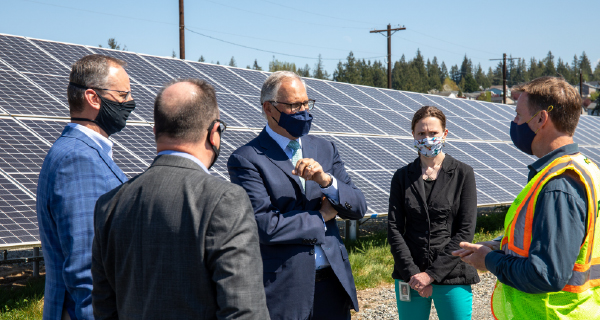 On top of that, the microgrid “could play a critical role in helping the PUD restore power in the case of a devastating earthquake in our region,” he said.

The area where the microgrid is built is near the Arlington Airport and a growing hub of industrial and commercial activity, including the recently announced development of a large Amazon facility.

Inslee received a brief tour of the different elements that make the microgrid unique: 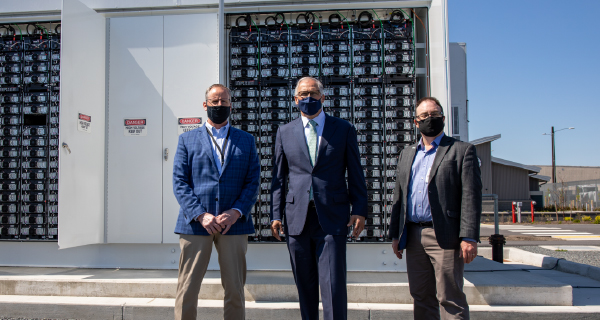 Swaney said that the project is undergoing testing and commissioning and should be fully operational by early July. “We are anticipating hosting a virtual ribbon cutting in late August,” he said.

There are many aspects of the project that are innovative, but three are truly unique and being studied closely, he said.

The pair of Mitsubishi Electric V2G chargers on site are one of the first utility deployed (non-demonstration) projects of its kind in the U.S. Nissan is a partner and Pacific Northwest National Laboratories is studying the use of V2G technology.

Second, the Hitachi-ABB PowerGrid’s Grid Forming Inverter helps ensure there is no power loss during the battery’s transition from powering the grid to acting like a generator to power the facilities on site. The University of Texas is studying the Grid Forming Inverter.

“The battery fire suppression system was a great collaboration between PNNL and the AFD to create a system that is arguably the safest in the country if not the world,” Swaney said.

“We are planning to use this system to provide back-up power to a future office being constructed on the site (anticipated completion 2023),” said Gibson. “We are currently testing the system on the recently completed Clean Energy Center so that when it comes time to connect to the new office – we know that everything works.”

We'll send reminders on upcoming board meetings, ECA calls with members, and other important happenings.